It was the first day of Ramaḍān 1996, when my 2 colleagues, who had gone to Florida (USA) to lead Tarāwīḥ, called me saying they needed 2 more Ḥuffāẓ. I immediately got my friend Ḥāfiẓ Rafīq Shaikh ready, and we both took a flight out to The States, headed for Tampa.

My 2 colleagues, Mawlānā Yaḥyā (Bolton) and Mawlānā Us̱mān Ganī (Blackburn) were leading Tarāwīḥ in Tampa. Ḥāfiẓ Rafīq and I were called, at the last minute, to lead Tarāwīḥ in Newport Richey, a 30 minute drive from Tampa. Our Tarāwīḥ took place in a doctor’s surgery owned by Dr Yūsuf Kariwālā, with approximately 20 people praying behind us, male and female, all professionals, mainly doctors.

We had a wonderful time. America is amazing and Florida is just beautiful, surrounded by the Gulf of Mexico, and generally nice and clean. To our amazement, we found hardly anyone walking in Florida, with most traveling by car. There were no local shops; everything was a 15 to 20 minute drive. Everyone seemed to live in massive mansions and, from the outside, it seemed they were having a very enjoyable life.

Cars were nice and big, and some roads had 6 lanes on either side. One evening, we were invited by Dr Yūsuf Kariwālā for Iftār. To say his house was a mansion would be an understatement. With about an hour left for Ifṭār, he opened up the back section of his house for us to sit and recite The QurꜤān. Lo and behold, he had his own pier that led directly into the Gulf of Mexico! It was breathtaking. Sitting on that pier, under the shining evening stars, with the beautiful blue water flowing underneath, we learnt our QurꜤān for Tarāwīḥ that night.

We had a number of Iftār dāwats, all in mansions with built in swimming pools, etc. Although it was Ramaḍān and the weather was boiling hot, we made the most of Florida, enjoying Busch Gardens, Disneyland, Epcot Centre and Seaworld. These attractions were out of this world. Spectacular!

Having stayed 20 days there, once our QurꜤān was completed in Tarāwīḥ, we moved on to New York. We only had one day and guess what? It snowed very heavily in New York that day. We just about managed to see the main tourist attractions of New York, the most memorable of which were the famous twin towers. We wanted to go all the way to the top, to the 107th floor, but due to the excessive snow, the lift could not go higher than the 94th storey.

All of New York was visible from there; a breathtaking view. 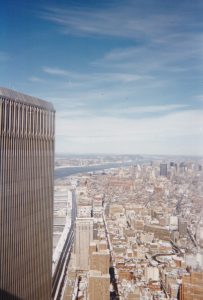 I managed to take a photo of the other tower from the top. Little did I know back then in 1996 that, 5 years later, on the 11th September 2001, both would come crashing down to earth. It was a memorable 24 hours in New York. We all returned to the UK in time for ꜤEid ul-Fiṭr, ‏مَا شَآءَ الله‏.

I will finish with 2 reflections of the US. Firstly, the majority of the people I met, complained of no contentment of the heart, despite having everything one could dream of.

Secondly, families in the US hardly have a social life, because everyone is just so busy. Each family member has their own car, and all of them spend the whole day at work and hardly have any family time together. This has resulted in the new generation losing their mother tongue and also distancing themselves from culture and religion.

Almighty Allāh give us all the right guidance. Āmeen

The life of Ḥaḍrat Maryam AS and Ḥaḍrat ‘Īsā AS (1)

The life of Ḥaḍrat Maryam AS and Ḥaḍrat ‘Īsā AS (2)