As I was approaching the end of my second year in ꜤĀlim class in Dārul Uloom Bury in 1987, my very close friend Mawlānā Us̱mān Ganī (Blackburn) and I decided to go to Portugal for Tarāwīḥ. We spent the whole month in a town called Portela.

The locals did not have their own Masjid, so they were praying Ṣalāh in a small unit, in a multi storey car park. We both led 10 RakꜤāt each and had an immaculate Ramaḍān, ‏مَا شَآءَ الله. Our hosts were Anwar and Sikander, both brothers of Marḥūm Hāji YāꜤqūb Bhai Mozambique and Hāji Ayyūb Bhai Accountant (Blackburn).

We became very good friends a brother by the name of Us̱mān, who was always ready to take us sightseeing in the capital city, Lisbon. It was summer in Portugal, and the weather was immaculate ‏مَا شَآءَ الله. On many occasions, we had Iftār at the house of Hāji YāꜤqūb Bhai (brother-in-law of Hāji IsmāꜤīl Vali, Blackburn). We completed The Holy QurꜤān on the 27th night and returned to the UK in time for ꜤEid ul-Fiṭr.

Two years later, in 1989, I went to Portugal again, this time with my friend Ḥāfiẓ Rizvān. We had a beautiful Ramaḍān, in Portela, starting with Hāji IsmāꜤīl Baghat and his family. They were an elderly couple. Khala was a Khatri, and her cooking was second to none. We looked forward to Suhūr and couldn’t wait for Iftār.

Our friend Us̱mān was with us once again. We expressed our wish to go to Spain if possible. Us̱mān made all the arrangements for a 3 day trip, on a tourist coach, to Spain. This was an amazing journey, with just Ḥāfiẓ Rizvan and I on a coach full of Portuguese tourists visiting Spain. Not one person spoke English, including the driver.

We spent 2 nights in Córdoba, ‏مَا شَآءَ الله. One of the saddest days of my life was when I entered the ‘Umayyād Masjid of Córdoba. An immaculate masterpiece, one of the greatest Masjids of the world converted into a church. My heart was shattered. Yā Allāh!

Ḥāfiẓ Rizvān and I spent 4 hours in this beautiful Masjid. It was my heartfelt desire to offer 2 RakꜤāt here but there were so many tourists there that it was very difficult to pray. We left with teary eyes and bleeding hearts, returning back to Portugal and, from there, back to the UK. 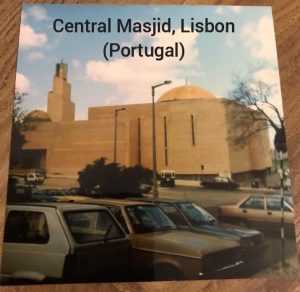 Almighty Allāh guide the whole of mankind to the Straight Path, Āmeen.

Don’t Be Influenced by Others