During my days at Dārul Uloom Bury, I made friends with a lot of students from Batley. Some of them were classmates and there was always a bit of banter. It had become a running joke that Batley only had one traffic light, with Dewsbury on one side, and Batley on the other, reflecting upon how small Batley was.

Then there was the famous Fox’s biscuits factory. We used to love the ‘broken biscuits’ which our Batley colleagues would bring us plenty of. Relating a story regarding Batley, my Marḥūm father-in-law, Qāri Ismā’īl Samniwālā, related to us in class one day that he made a special trip to Batley, because he had heard that the Jāme Masjid on Bradford Rd had a new Minārah. It was the talk of the town.

Marḥūm Qāri Ṣāḥib told us that, when he saw it, it turned out to be a lead pipe in the roof! I can go on and on about Batley but let’s get to the point of this very important message today.

The by-election of Batley and Spen will be taking place tomorrow (Thursday 1st July). Having followed the buildup to this election, it has become apparent that the majority of the fine people of Batley have united to ensure that they do not give their vote to the party that is harmful to Islām and the Muslims.

For too long, Muslims have just gone with the status quo and followed in the footsteps of their community leaders. When party leaders come out with Islamophobic comments and show support for oppression and barbaric actions to which even animals would be ashamed, then it’s time to show such parties and party leaders that they can’t take the Muslim vote for granted.

My humble request to all brothers and sisters of Batley is to make sure you follow the guidelines of your ‘Ulamā tomorrow. Come out in your thousands and show the Labour Party and the Labour Leadership that we will not be fooled by your party politics. I hope and pray to The Almighty that this is the start of the downfall of the party that undermines Islām and the Muslims, Āmeen.

Please, brothers and sisters of Batley, all eyes are on Batley tomorrow; do not let us down.

Almighty Allāh give us all the correct understanding, Āmeen. 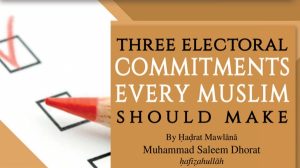