Our projects started in Albania in 1993. A few years ago, we started working in North Macedonia which is next to Albania. This was my second visit. Within a period of 12 hours, we managed to visit most of the areas where our Education Classes are taking place.

We met with one of our teachers, Irfān, who had been brought up in an orphanage, due to his parents splitting up. Today, Irfān is the father of 4 children and carries out Imāmat duties in his village,Dobroshinci Strumica, as well as teaching children.

It was very sad to see that the local Masjid in Irfān’s village had been totally destroyed by the enemies of Islām. We then drive for three hours passing through some beautiful scenery of lakes and greenery surrounded by mountains. 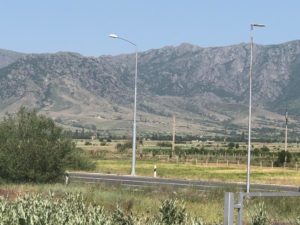 In Reisen, we met up with our teacher, Shaikh Momin, who had spent 8 years in Mawlānā Tāriq Jamīl’s Madrasah, in Faisalabad (Pakistan), completing his ‘Ālim course there. A 19 year old student who had completed the memorisation of 10 Juz of The Holy Qur’ān recited from various different places. 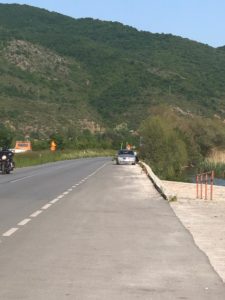 Continuing our journey, we stopped at a service station, where we met with a few Muslim brothers.

Theirs was a very emotional story. Due to lack of Islāmic knowledge, the whole area where these brothers lived had fallen prey to the onslaught of missionaries. Many of them had started to wear necklaces with crosses around their necks.

A Jamā’ah from Pakistan visited the area and made so much effort that they brought the whole community back to Islām again and the missionaries had to move out of the area. A beautiful Masjid has been built, which is always full of Musallī, سُبْحَانَ الله. What a wonderful achievement.

Our last stop of the day was at the newly constructed Masjid in the village of Podgorci, in Struga. The Masjid is built 970 metres above sea level and is an absolute masterpiece.

I had visited this Masjid in 2018 when work was still ongoing. Now it is near to completion. The locals have raised over a million euros so far for the Masjid.

We left Macedonia at 10pm and crossed over the border to Albania where it was time to pray ‘Ishā and have a rest. The journey continues.

Ramaḍān and The Mercy of The Almighty

The Lottery and Friday EuroMillions