A Jamā’ah from the UK had visited Albania in 1993 and, upon their return, one traveller from Bolton related his kārguzari (feedback report) to his brother here in Blackburn, who in turn narrated the story to us. Whilst the report was very interesting, it was also very sad.

A very small country, the size of Wales, situated in Eastern Europe bordering Greece, with a fascinating history. Having been under Islamic rule for over 500 years, it had suffered 40 years of very strict communism. Being the only country in Europe with a Muslim majority after Turkey, the same country that was home to over 2000 Masjids, was now left with less than 50 Masjids.

Our first visit was in 1993. It’s been 27 years now since the day our 3 colleagues stepped foot on Albanian soil. In the same country which had 50 Masjids in 1993, today by the Grace and Mercy of The Almighty, over 650 Masjids dominate the landscape of Albania, ٱلْحَمْدُ لِلَّٰهِ. Masjids have been built, and we now need to get these Masjids full (ābād), اِنْ شَاءَ الَّلهُ.

One of our most important projects in Albania are the Islamic Classes Project. We have set up 70 classes all over Albania, ‏مَا شَآءَ الله, paying the salaries of our Albanian Mu’allims and Mu’allimāt, which is £1300 annually, on average. 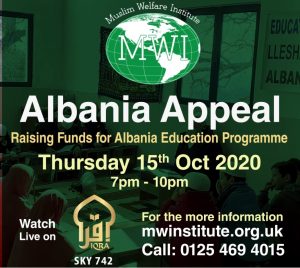 Tomorrow (Thursday) is your opportunity to be part of this fantastic revival of Islam in Albania. Make sure you tune in to Iqra TV (Sky 742) between 7pm and 10pm and make your donation.

Almighty Allāh make the appeal successful and make this work a means of entrance into Jannat ul-Firdaus for all of us, Āmeen.